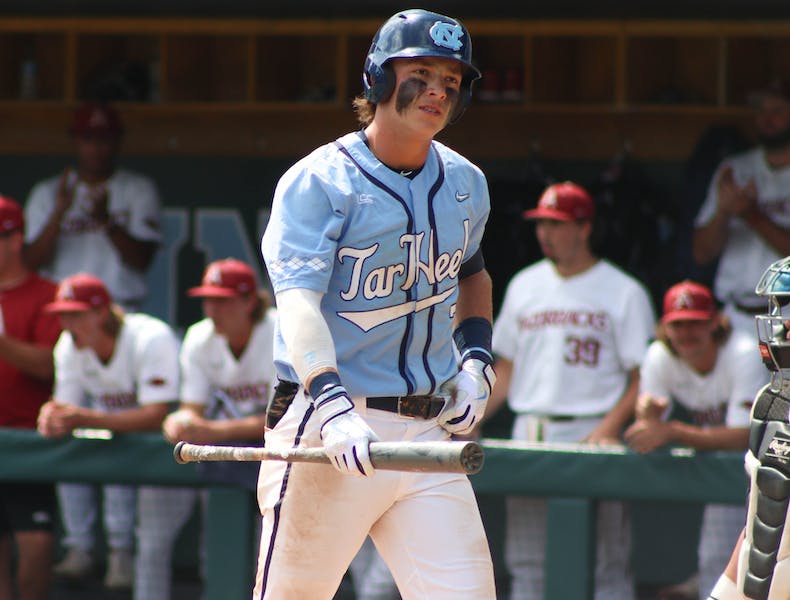 Forbes wasn’t referring to UNC’s 4-3 loss to Arkansas in the NCAA Super Regionals, but rather the shocking turn of events for North Carolina third baseman Mac Horvath . On Saturday night, Horvath underwent an emergency appendectomy, forcing the starter out of the lineup for Sunday’s game.

The first game the runner-up missed all season couldn’t have turned out more unexpectedly.

After eight innings and two weather delays, the game remained tied at 2-2. However, as the final frame approached, the Tar Heels found themselves on the brink of victory thanks to an unlikely hero.

With his fifth hit of the season and his first hit since February, second Patrick Alvarez led Tomas Frick to take a 3-2 lead.

Frick stomped home plate and punched the air as Tar Heels jumped over the dugout fence and spilled onto the grass behind him. Alvarez, standing triumphantly first, lifted his leg in excitement.

“It was really cool, and you feel like we’re going to win this game when it happens,” Forbes said. “So that was a big negative.”

By the very next frame, Alvarez was lying on the ground in defeat. Arkansas senior Brady Slavens’ single slipped through the second baseman’s extended glove and into the outfield to score the winning run.

Just two innings out of one of his most important catches of the season, freshman center fielder Vance Honeycutt headed to right field to console redshirt junior Angel Zarate. As the Razorbacks marched around the shallow outfield, hoisting “Omahogs” signs, Honeycutt crouched down to wrap his arm around his teammate’s shoulders.

The freshman took a dive in the seventh inning to block a Razorback in scoring position and keep the game tied. Asked about the game after the match, Honeycutt could barely find the words to describe it. It didn’t matter in the end.

“I think it was Slavens, (he) just grabbed a piece of it and it was just in the air for a little too long,” Honeycutt said. “I thought being able to hold them was important, then we scratched one. At the end of the day, they got us in the ninth.

And what a shock the bottom of the ninth inning was for the Tar Heels.

After first year Peyton Stovall crossed the plate to hit Arkansas’ ticket to Omaha, seemingly every player in North Carolina froze on the field. They stood still or crouched down, refusing to move from places where they watched their season end.

Left-handed pitcher Caden O’Brien, who was brought to the mound in the final frame of the game, was one of the first Tar Heels to break the silence. Wearily crossing the ground, he let out several angry cries before entering the canoe.

Who would have thought the senior would only throw one pitch before giving up the hit? Who could have predicted that Davis Palermo, closer to UNC, would allow two straight singles and a walk to load the bases moments before?

It was an unusual performance for the North Carolina bullpen. It was just unexpected.

And at the end of it all, after the Tar Heels cleared the field and Arkansas head coach Dave Van Horn got drenched in Powerade, Serretti strolled to the edge of the infield.

He bent down and picked up a few handfuls of dirt behind the shortstop position he had held for four years. He placed the mixture in a mug before leaving Bryson Field for the final time.

It was a gift for his mother – a gift she will receive sooner than he thought.

Despite the unexpected end to the season, UNC’s unprecedented race to get to Super Regionals is the exact reason veterans like Serretti and Zarate returned to North Carolina at the end of last season. That’s why, despite the heartbreaking loss, the Tar Heels are still grateful for moments like Sunday’s game.

“Me and Angel (Zarate) came back for a race like this,” Serretti said. “That’s all I could ask for. It didn’t end the way we wanted but I had so much fun. The bond I created with all these guys is something that won’t be broken.”