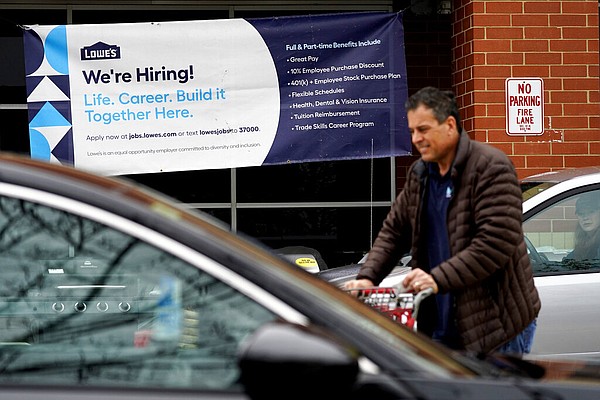 US added 428,000 jobs in April despite soaring inflation

Friday’s jobs report from the Labor Department showed last month’s hiring kept the unemployment rate at 3.6%, just above the lowest level in half a century.

The economy’s hiring gains have been surprisingly steady in the face of the worst inflation in four decades. Employers have added at least 400,000 jobs for 12 consecutive months.

The latest employment figures contained some warnings about the labor market. The government has revised down its estimate of job gains for February and March by a total of 39,000.

And the number of people in the labor force fell by 363,000 in April, the first decline since September. Their exit slightly reduced the proportion of Americans working or looking for work from 62.4% to 62.2%. Many industries have been slowed by labor shortages. The country remains 1.2 million fewer jobs than at the start of 2020, just before the pandemic hit the economy.

Bovino noted that some Americans remain on the fringes of the workforce because of lingering concerns about covid-19 or because of difficulty finding affordable daycare for unvaccinated children.

Employers continued to grant wage increases last month. Hourly wages rose 0.3% from March and 5.5% from a year ago. But prices are rising faster than wages.

“Yes, we have seen an increase in wages,” Bovino said. But with inflation at its highest level in 40 years, “people are still under pressure”.

Across all industries last month, hiring was widespread. Factories added 55,000 jobs, the most since last July. Warehouses and transportation companies added 52,000, restaurants and bars 44,000, healthcare 41,000, finance 35,000, retailers 29,000 and hotels 22,000. Construction companies, which were slowed by shortages of labor and supplies, only added 2,000 people.

Still, it’s unclear how long the jobs boom will continue. The Fed this week raised its key rate by half a percentage point – its most aggressive move since 2000 – and announced further significant rate hikes to come. As Fed rate hikes take effect, they will make spending and hiring increasingly expensive.

In addition, the vast economic aid that the government gave to households has expired. And Russia’s invasion of Ukraine has contributed to accelerating inflation and clouded the economic outlook. Some economists warn of a growing risk of recession.

For now, the resilience of the labor market is particularly striking against a backdrop of soaring prices and rising borrowing costs. This week, the Labor Department provided further evidence that the labor market is still booming. He reported that just 1.38 million Americans were collecting traditional unemployment benefits, the fewest since 1970. And he said employers posted a record 11.5 million job openings in March and that layoffs remained well below pre-pandemic levels.

In addition, the economy now has an average of two jobs available for every unemployed person. This is the highest proportion ever recorded.

And in another sign that workers are enjoying unusual leverage in the labor market, a record 4.5 million people quit their jobs in March, clearly convinced they could find a better opportunity elsewhere. .

Chronic shortages of goods, supplies and labor have contributed to skyrocketing prices – the highest rate of inflation in 40 years. Russia’s invasion of Ukraine in late February has dramatically worsened the financial landscape, sending global oil and gas prices skyrocketing and severely clouding the domestic and global economic picture.

The Fed, which most economists say has been far too slow to recognize the inflationary threat, is now raising rates aggressively. Its goal is notoriously difficult: a so-called soft landing.

“Trying to slow the economy down just enough, without causing a recession,” said Rubeela Farooqi, chief U.S. economist at High Frequency Economics. “Their record on this is not particularly good.”