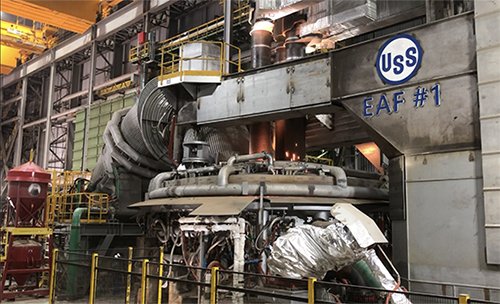 US Steel doubles on Arkansas

There’s a lot going on about the new $3 billion US Steel plant, bound for Osceola in Mississippi County, Arkansas, it’s just that surreal.

The growing presence of steel, an industry that has only appeared in this flat, open corner of the state in recent decades, is one thing. But the opening of what the project’s parent company calls its most technologically advanced facility — and what is the largest private economic development project in state history — stretches the imagination far beyond beyond the rolling farmlands of today.

And that forward-looking vision, officials say, is precisely the point. For, in addition to 900 jobs paying over $120,000 and 3 million annual tons of state-of-the-art steelmaking capacity, Big River’s new steel mill brings a compelling and bold vision for the industrial future of the State.

As US Steel President and CEO David Burritt said in a statement released ahead of the Feb. 8 groundbreaking ceremonies: “Several years ago, we embarked on a transformative vision for US Steel. Now we celebrate as we take another big step towards becoming the steel company of the future.

“This facility is designed to bring together the most advanced technology to create the steel mill of the future that offers sustainable and cost effective solutions to our customers.”

Unsurprisingly, state officials are equally excited about the future plant, which will reside next to the company’s existing Big River Steel facility after two years of construction.

“(The plant) is another opportunity in northeast Arkansas to transform the region,” said Randy Zook, president and CEO of the Arkansas State Chamber of Commerce and of Arkansas Associated Industries. “It’s a great opportunity, and we’re encouraging an innovative approach to it that could be helpful in that regard.”

Dan Brown, senior vice president of advanced technology, steelmaking and chief operating officer of Big River Steel Works, said a combination of factors has made northeast Arkansas the new center of the nation’s steel industry and a jewel in the crown of US Steel.

“The combination of labor, public and private support, logistics and energy supply has made this region the best choice for US Steel,” he said. “Our strategy is focused on producing advanced and sustainable steel, so the combination of these factors, along with access to markets, makes this an important capability for us. In addition, many of our strategic customers will benefit from the location. »

Zook, himself a former industrialist before running the state chamber, agreed.

“The biggest advantage is the proximity to the river,” he said. “It’s the transport of scrap metal to these factories. They totally run on scrap. They are downstream from major population centers. Easy rail access, easy road access. It is a function of location which is the initial driver.

The history of steel in Arkansas begins with Nucor Steel’s beginning of operations in Blytheville in the late 1980s. The company reaped the benefits of physical proximity to markets and options for transportation and robust shipping, as other companies have quickly noticed.

“Once Nucor put a grinder, then two grinders in there, the word was out,” Zook said. “It’s a pretty tight brotherhood in this industry, and they watch each other closely.”

Big River Steel was one of the companies to follow Nucor’s lead, opening its Flex Mill in 2014. In just five years, US Steel announced it had reached an agreement to buy a minority stake in Big River Steel, with an option to buy. the remaining piece by 2023. It didn’t take that long, gobbling up the remaining 50.1% stake in a deal that became official in January last year.

“We don’t build for additional capabilities but for enhanced capabilities,” he said. “More sustainably produced steel is critical to the long-term viability of the industry, and this technology will allow us to manufacture products with a quarter or less of the carbon intensity of integrated mill operations.

“We will supply more value-added steel products from this plant for the automotive, appliance, electrical and construction sectors, where demand remains high.

Zook noted that the ripple effect of the announcement has the ability to attract a diverse group of new industries settling in Arkansas, entities that depend on steel to manufacture products and therefore wish to closer to suppliers.

“You have the biggest investment ever made by Ford Motor Company underway 80 miles east of Osceola, as the crow flies,” he said in reference to Ford’s planned production plant. in Stanton, Tennessee. “That’s one of the main reasons he’s gonna be there, near that mill. Look around. You got that mill and those mills in Jackson, Miss; St. Louis; Nashville; Tupelo, Mississippi. All those mills are a relatively short distance by truck to deliver the products.

Electric arc furnaces, like this one in Alabama, will be used at US Steel’s new plant in Mississippi County.

“Then it will pretty quickly spur downstream entities to manufacture and ship components and other things for the auto plants that are already there.”

Zook said state and local entities — from economic development to higher education — deserve a lot of credit for making this kind of generational investment, which Brown also noted as a primary draw for the company to grow. roots deeper in Arkansas.

“The state and local support has been overwhelming, along with the energy supply and logistical capabilities needed for a project of this scale,” he said. “Entergy has been instrumental in the success of this project, alongside BNSF and other logistics providers.

“We are also pleased with the partnership with Arkansas Northeastern College, as their Steel Technology program provides an excellent foundation for future employees, allowing us to hire the workforce of tomorrow.”

For his part, Arkansas Commerce Secretary Mike Preston laid the lion’s share of credit at the feet of local officials, saying their commitment and foresight were key to attracting, retaining and now expanding the presence of the industry. steel there. 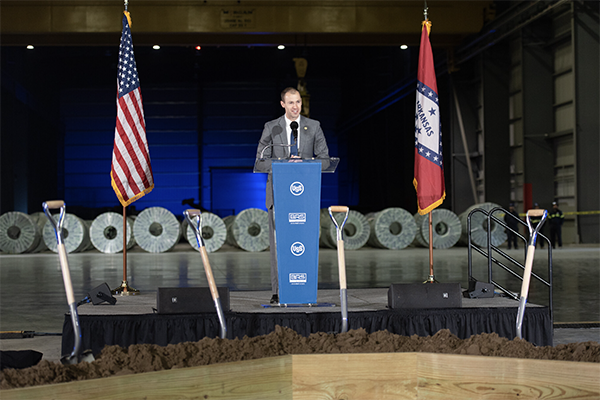 Mike Preston, featured at the US Steel groundbreaking, said the agreement raises the state’s profile and sends a positive message to other companies about the business climate in Arkansas.

“I give Mississippi County and the region a lot of credit,” he said. “In the 1980s, when they said, ‘This is the direction we want to go’, the state supported it and they did it. There was a real desire there. They had lost agricultural jobs, they had lost airbase jobs there, and they needed a new industry.

In addition to the region’s physical amenities, Preston also identified labor as a key differentiator between northeast Arkansas and other candidate locations for the Big Steel plant. At the same time, he said, labor is also the biggest hurdle for the new business after the factory is completed.

“The X factor that people may not realize is the quality of the workforce that we have in our state,” he said. “A lot of people who used to work on the air base or in the agricultural sector have this dynamic spirit and attitude. They come in, they see a job, they learn to do it. They roll up their sleeves, and they do.

“That’s also the challenge we face today, hiring 900 employees. It’s a lot. But what you have to consider is that this is a regional impact. You have people not just in Mississippi County, you have people all over the region, from Jonesboro and even across the river from Memphis and Dyersburg [Tenn.]. We will attract people from the region.

Preston said another benefit of the high-profile deal is that it raises the state’s profile and sends a positive message to other companies about the business climate in Arkansas, particularly the speed at which this deal happened. He said the company called state officials in September, by which time 40 sites in 13 states were at stake, and in January the plant found its home in Arkansas.

“It captured national media attention for a number of news cycles and several days after. Even after shoving the shovel into the ground, people were still celebrating and talking about it,” he said. “I’ve heard from colleagues and businesses across the country who have been very impressed. Now, in our recruiting efforts and strategy, it comes up in every conversation we have: “Hey, we heard about the location of this factory. We are interested in doing business in Arkansas.

Brown said the palpable sense of welcome and appreciation for the company’s presence can be felt daily, and that feeling is reciprocated.

“We see a multitude of positives in northeast Arkansas, and we see an obligation to continue contributing to the community in ways that will benefit our employees and our neighbors,” he said. declared. “It’s clear that Arkansas wants US Steel to operate in this state, and we look forward to helping the community reach its full potential.”