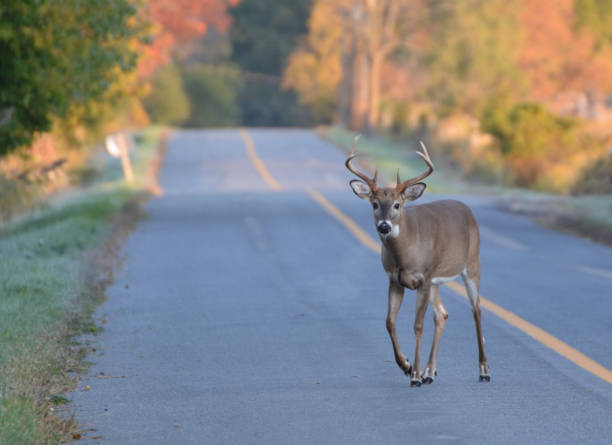 FAYETTEVILLE, Ark. (KNWA/KFTA) —As we begin a busy travel week, the Arkansas Game and Fisheries Commission urges you to watch out for deer on the roads.

Steve Dunlap of the AGFC said right now that Arkansas’ millions of deer are chasing a mate. During mating season, deer are more active and inclined to cross roads that they might normally avoid.

“Their desire or need to reproduce is stronger than their need to be aware of things like vehicles,” Dunlap said.

With the deer on the move, local body shops are getting busier. Quality Collision Repair owner Roy Lovell said he receives two to three calls a day from drivers who have hit a deer.

Start of the hunting season: Safety guide for hunters

Lovell’s team is currently repairing a car with a shattered front end, broken headlight and shattered rear windshield following an accident with a deer on the freeway. He said deer collisions usually cause the most damage when they happen on the highway.

Lovell said if a deer knocks out a driver’s rearview mirror, headlights or windshield, it becomes impossible to drive, and some of these wrecks leave behind wrecked cars.

“Many motorists swerved to avoid collisions and ended up destroying their own car and injuring themselves,” Dunlap said.

Dunlap’s best advice when dealing with a deer is to just slow down, but if you hit one he asks you to report it to the AGFC.

WATCH: Deer runs inside nursing home after crashing through window

“We note this in our records and it actually gives us good data to understand population densities in all habitats. Then if it’s bad enough, obviously you have to call the police,” Dunlap said.

You can also use dead deer for meat if you feel inclined to according to Dunlap.

Dunlap said the deer moved around early in the morning and in the evening. He said if you see a deer, there’s probably another one following it.