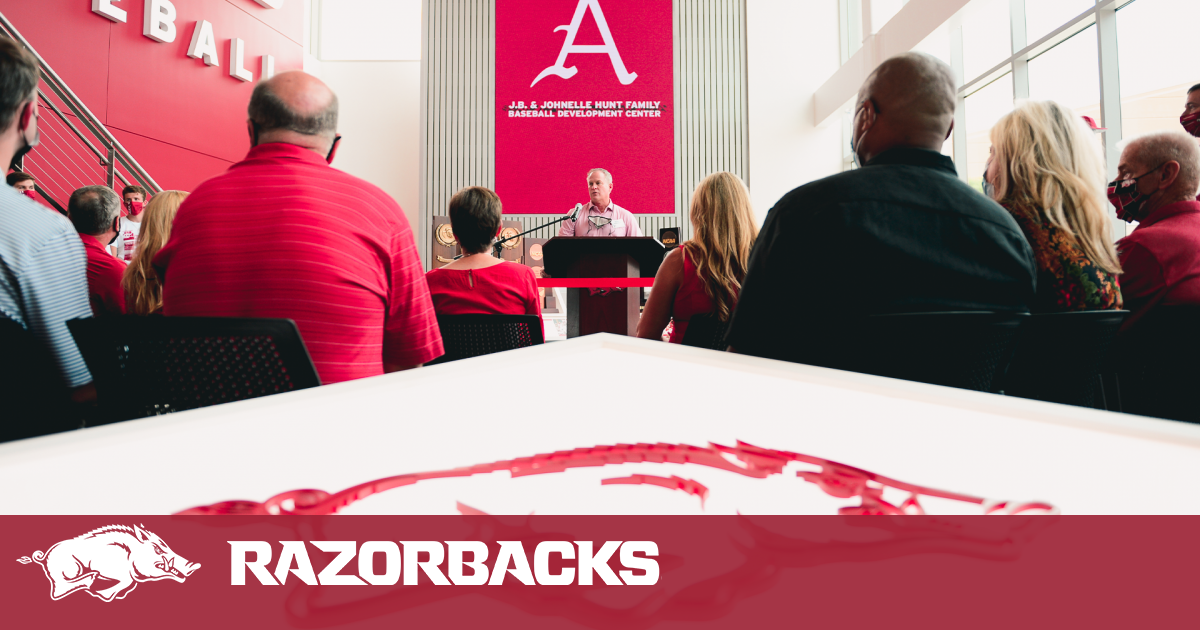 Fayetteville, Ark. –Vice-Chancellor and Director of Athletics for the University of Arkansas Hunter Yurachek was named one of five finalists for Athletic Director of the Year by the Sports Business Journal on Monday. Yurachek joins Sandy Barbour (Penn State), Lisa Campos (UTSA), Sean Frazier (Northern Illinois) and Tom Holmoe (BYU) as nominees for the prestigious award. The winner will be announced at the Sports Business Awards to be held at the New York Marriott Marquis Times Square on Wednesday, May 18, 2022.

Yurachek’s selection was one of two selections from the University of Arkansas. Razorback Athletics is also nominated in the Best in Sports Social Media category. Other nominees in this category include the Brooklyn Nets, Drone Racing League, ESPN on TikTok and Just Women’s Sports. The winner will also be announced at the awards ceremony in May.

Yurachek is in his fifth year as vice chancellor and director of athletics at the University of Arkansas. In 2020-21, Razorback Athletics had the most successful collective year in school history, including a program-best eighth-place finish at the Learfield IMG Directors’ Cup. Arkansas’ previous best result was 14and in the competition that follows the nation’s most successful intercollegiate athletic programs.

The Razorbacks have won an NCAA (Women’s Indoor Track & Field) title, earned eight NCAA top-10 finishes, and a remarkable 10 regular-season and tournament championships from the SEC, including Triple Crown sweeps from the SEC in men’s and women’s cross country and track and field, a second consecutive regular season crown in soccer, the program’s first regular season title in softball, and a regular season and tournament championship in baseball. Arkansas’ championship total led the league and doubled the next closest SEC schedule. Additionally, men’s basketball qualified for the Elite Eight for the first time in over 25 years.

Meanwhile, Razorback student-athletes combined for a 3.25 GPA and 104 student-athletes graduated from the University of Arkansas. A multi-million dollar renovation of the Randal Tyson Athletics Center was completed, while brand new facilities, including the $27 million JB and Johnelle Hunt Family Baseball Development Center and the High Frank O’Mara track and field performance of $15 million was built.

Arkansas continued its championship momentum in the 2021-22 college year by winning three Southeastern Conference championships (men’s and women’s cross country, soccer) and a New Year’s Eve bowl game (Outback Bowl) in football in the fall semester. The Razorbacks ranked No. 8 in the Learfield Directors’ Cup final fall rankings, the highest of any SEC program.

Razorback Athletics was also honored with a nomination in the Best of Sports Social Media category for their innovative and outstanding engagement across multiple social media platforms, particularly for their work during the 2021 NCAA Men’s Basketball Tournament. Arkansas was the first tournament team to surpass one million cross-platform interactions. The Razorbacks finished third among all NCAA Division I men’s basketball programs in total cross-platform interactions with 1.8 million for March 2021.