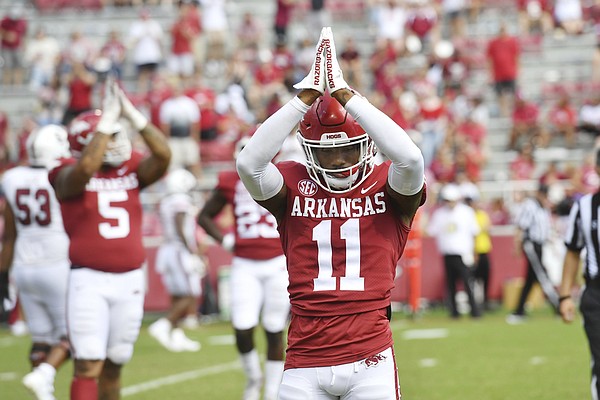 A quick look at the Arkansas vs. Missouri State contest

FAYETTEVILLE, Ark. –University of Arkansas linebacker Christoper “Pooh” Paul, the freshman rookie whose reps have gone up, was well noted by Pro Football Focus in last week’s win over South Carolina with 5 tackles, including 1.5 for 8 yards loss and a half sack. He also picked up a fumble from Spencer Rattler forced by Jayden Johnson on the penultimate play of the game.

“I’m just taking it one day at a time,” Paul said of a potential increase in playing time. “I’m taking it as a way to improve. I have two great guys ahead of me at Drew Sanders and Bumper Pool , and I’m just feeding off their energy and learning as much as I can from the two vets who played in the SEC.”

“I’ll have to watch those one of these days,” he added. “I haven’t done it yet. I’m 60. But let’s say yes. I think I agree with them. I think he’s been playing really well. He’s gotten more reps this week than the week before.”

Paul completed Pool and Sanders, the starters, when the Hogs went 4-3 or 3-3 up front.

“He’s a good player,” Pittman said. “A physical guy. He knows what he’s doing better now than he’s ever done. He’s playing error-free football. … When he gets a lot of his reps is when we’re in that three look linebackers when Drew is in the field like a rush/jack/buck, whatever you want to call him.We’re getting a little more comfortable with this set because of Pooh’s play.

South Carolina attacked the Razorbacks with a selection of deep balls, although the Gamecocks only connected on a few last Saturday.

Where the Gamecocks really made hay was by making short throws and turning them into huge winners, such as Antwane Wells’ 38-yard score early in the second half and several other low-threshold crossings. deep or batting lanes that broke big as part of their 376 passing yards in the Hogs’ 44-30 win.

“They were running from the green[ical] roads, with four greens on us, and [the middle of the field] was open,” coach Sam Pittman said.

“We have to drive on the ball better. We have to be in a safe position. We can’t go too deep. You know, if there are no threats in our area, we have to break on the ball.

“We just have to, we have to play better there. And a lot of places. But… we had problems with the midfield, whether it was two in midfield or one. And we have to solve this issue, which I certainly think we will do.”

The Razorbacks face a tough challenge at Missouri State on Saturday as coach Bobby Petrino can exploit midfield with the best of them.

“They know they’re going to have a challenge on his offense, just because that’s what he’s known for,” Fayetteville High School coach Casey Dick, the starting first quarterback for Petrino in Arkansas, told Reuters. Hawgs Illustrated sports club this week.

Sam Pittman will be looking for a new director of player development to replace Fernando Velasco, who transitioned with him from Georgia with special teams coordinator Scott Fountain and strength and conditioning coaches Jamil Walker and Edd Ellis.

“It is with a humble and grateful heart that I write to let you know that today is my last day at the University of Arkansas,” Velasco said on social media Thursday. “I have enjoyed working here for the past 3 years and having the honor of developing the young men in this team.”

Velasco, a center from Georgia who played in 83 NFL games for four teams, has accepted the position of director of player development with the Atlanta Falcons, he announced.

Missouri State has 26 players with FBS experience with multiple transfers from Power 5 schools, including former Arkansas wide receiver Jordan Jones. A 2016 Smackover signing, Jones had 38 catches for 592 yards and 4 touchdowns in 22 games at Arkansas.

The Bears’ roster includes 48 total transfers out of schools from coast to coast.

“He’s done a great job improving his talent level at Missouri State,” Arkansas coach Sam Pittman said. “And we know they know the experience of playing D-1 ball, and that will be a challenge for us.”

Arkansas and Missouri State both have 2-0 starts and are in the top 10 in their respective polls.

Arkansas is 2-0 for the second straight year under coach Sam Pittman, but it’s only the fourth time since Missouri State coach Bobby Petrino last walked the Razorback sideline in 2011.

The Razorbacks have nine sacks in two games to rank third in the nation and a record 54 pace in the regular season. Arkansas’ single-season sack record is 40 in 1998.

The Razorbacks have posted 30+ sacks in a season just 11 times in school history.

Missouri State posted a school-record 30 sacks last season, eclipsing the previous record of 27 set in coach Bobby Petrino’s freshman year of 2020-21, a season that was split between seasons in fall and spring due to covid.

Andrew Parker, a former Razorback, started at linebacker for Appalachian State and had two tackles in their 17-14 loss to No. 6 Texas A&M last Saturday.

“It’s good for him, and it’s good for App State and good for those kids,” Arkansas coach Sam Pittman said. “I’ll catch the devil for saying that about A&M.