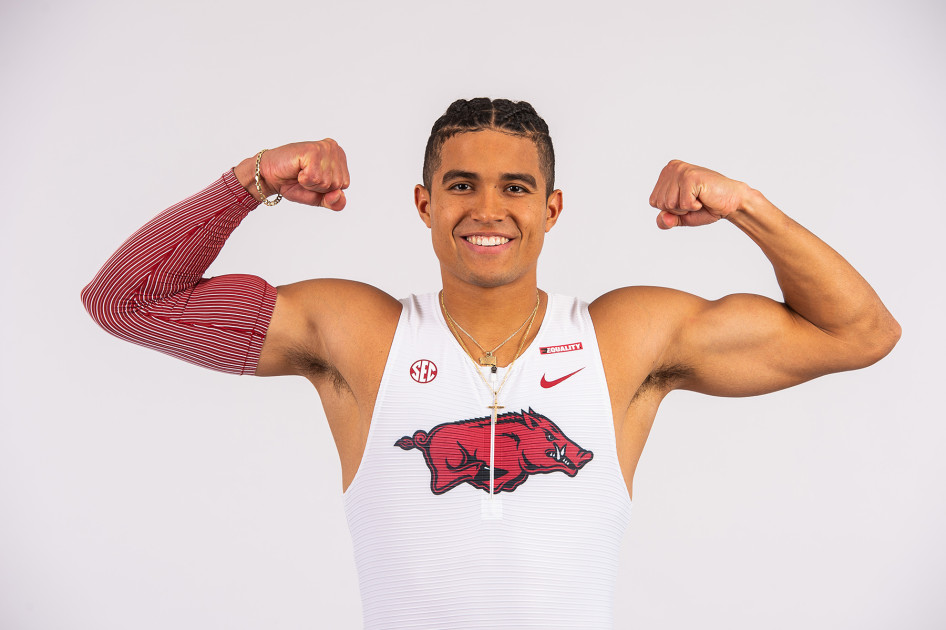 NEW ORLEANS – Junior Razorback Ayden Owens-Delerme was named one of three finalists for The Bowerman Award on Tuesday by the United States Track & Field and Cross Country Coaches Association along with Trey Cunningham of Florida State and Randolph Ross, Jr. of North Carolina A&T.

“Honestly, I was kind of expecting that after the indoor and outdoor seasons that I hosted,” Owens-Delerme said. “I was on the watch list for most of the year, and I was hoping to be in the top three. Being out there with Trey and Randolph is some pretty elite company. I’m pretty excited about it.

All three finalists for the 2022 Men’s Bowerman Award, college athletics’ highest individual honor, have won NCAA titles in both indoor and outdoor seasons in their respective events. Owens-Delerme won the indoor heptathlon and outdoor decathlon, Cunningham won the 60m hurdles and 110m hurdles, and Ross won the 400m titles.

“I’m so happy for Ayden and all the hard work he’s put in,” Arkansas men’s head coach Chris Bucknam said. “We’ve seen him compete all year and we’ve seen some outstanding effort and competition. He was very successful and we are really happy for him.

“What a great opportunity to be named to the top three finalist list of the top college track and field athletes in the country. I’m proud of him and Coach Geopfert and the hard work he put in as well. These two really have great synergy. Now let’s make this Bowerman win!”

Fan voting for The Bowerman begins Tuesday at 3 p.m. (CT) and ends Thursday at 1 p.m. (CT) at the following link: http://www.ustfccca.org/the-bowerman/the-bowerman-fan-vote

The season compiled by Owens-Delerme was simply exceptional. From how he won the NCAA Indoor title in the heptathlon, to breaking the collegiate record in the decathlon, and winning the NCAA Outdoor decathlon title, it all combined for a spectacular display of his talents.

Additionally, Owens-Delerme participated in the Razorbacks’ relays. Indoors, he shared 45.46 on the third leg of an Arkansas school record 3:03.18 in the 4 x 400 relay. Outdoors, Owens-Delerme ran the third leg of the SEC silver medalist 4 x 100 relay (39.24), which advanced to the NCAA West preliminary rounds. He provided a 45.9 lead in the 4 x 400 as the Razorbacks clocked a season-best 3:03.95 to advance to the NCAA championships.

“Ayden had a fantastic year and showed what a great competitor he is,” Arkansas associate head coach Travis Geopfert said. “He did it in all types of settings, where he had to come from behind or when he had the lead after day one.

“Ayden was also a team player for us, running on relays and competing in individual events at conference meets. Obviously, he is a complete athlete and he has proven throughout the year that he can be a great competitor in any situation.

Across six events of the NCAA Heptathlon, Owens-Delerme was in fourth place with 5,241 points, edging out leader Kyle Garland of Georgia by 152 points with the 1,000m race remaining to complete the event.

Owens-Delerme, who was in fifth place after day one of the NCAA heptathlon, produced three career-best scores on day two and generated the fifth-best performance on the all-time collegiate roster.

With his career-best 6,272 set in January, Owens-Delerme became just the second person to have a pair of top-five all-time college list performances as he joined Ashton Eaton. from Oregon.

“One, it’s not easy to win the NCAA indoor and outdoor titles, and two, that’s how he did it,” Bucknam added. “The fact that he came so far behind in the 1,000m, it was a phenomenal performance.

“I’ve been in athletics for 40 years as a coach and this effort has to be at the top of my list. This testifies to its character and competitiveness. Then away, competing head-to-head with Garland, he equaled the meet record held by Ashton Eaton. It was a phenomenal year. »

Leading the decathlon after every event on Day 2 except the pole vault, Owens-Delerme was in a more comfortable position going into the final event. As the overall leader, with just 11 points over Neugebauer and 37 over Garland, Owens-Delerme clocked 4:29.54 in the 1,500m to secure victory.

“I think Ayden had a couple of defining moments,” Geopfert noted. “One was the dramatic finish to come from behind and really dig deep for an NCAA heptathlon title. It was one of the most dramatic I can remember in NCAA history.

“Then his consistent performance in the NCAA Decathlon from start to finish. He did a great job and was in a unique situation where he didn’t need to go to the pit in the 1,500m, but he showed he could do it both ways.

Owens-Delerme’s next attempt is to compete in the decathlon, representing Puerto Rico, at the World Championships at Hayward Field in Eugene, Oregon next month.

“My mom’s family is from Puerto Rico,” Owens-Delerme noted. “I’ve been going there every summer, as often as I can, since I was little. So I always had a strong bond.

“My grandparents came straight from Puerto Rice and proudly carried the flag, the culture and the heritage. They instilled that in me and wanted me to wear it. They passed away recently, so I wanted to dedicate them my career. I felt that my impact could be greater if I represented a small country.

With a population of over 3 million in Puerto Rico, the fan vote could have a distinct advantage for Owens-Delerme.

“That’s the thing about Puerto Rico, when it comes to a successful athlete representing them at this level, they embrace them wholeheartedly,” Owens-Delerme said. “It will mean a lot to put those colors back on for the first time since 2018 and fight for a medal. I know that my whole country will support and support me.