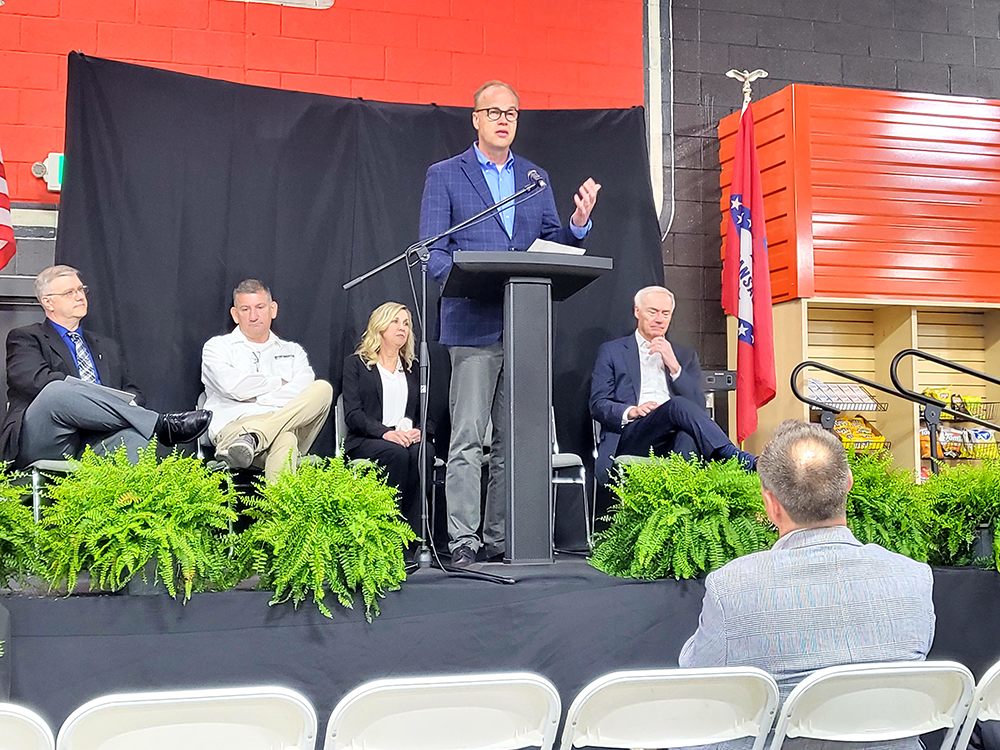 The Toro Co. of Bloomington, Minn., plans to invest about $50 million in Batesville’s Intimidator Group and double the company’s business over the next five years or so, company officials said. at Arkansas Business after an event they hosted on Thursday.

TTC has acquired lawn mower manufacturer Intimidator Group in a $400 million deal in January, and celebrated that deal with a bang on Thursday. Governor Asa Hutchinson attended the event, which was held at the Intimidator factory in Batesville.

“As we look to the future of the Intimidator Group as part of The Toro Company, we see an opportunity,” TTC President and Founder Rick Olson said during his comments.

He said the publicly traded TTC seeks to leverage the technologies and resources of its business to drive innovation and deliver products that improve the lives of customers, expand product lines, reach new markets, investing more in the Intimidator facility in Batesville and helping Intimidator employees grow.

Olson told Arkansas Business after the event that the deal only took six months.

TTC plans to implement a policy that 35% of sales must come from products introduced within the last two years at Intimidator, he said. TTC will provide capital and access to experts from other parts of the business to help its new acquisition grow, Olson said.

A few TTC executives will move to Batesville, including John Swanson, who will serve as Intimidator’s general manager. He and Daryn Walters, vice president of TTC’s Exmark and Intimidator Group businesses, were at Thursday’s event.

Intimidator founder Robert Foster also spoke at the reunion. Foster, who started the business with his wife Becky, said Intimidator turned down several interested buyers before being approached by The Toro Co.

He and Olson said the companies are a good match because they value innovation, serving customers, building good teams and treating employees well, supporting communities and good stewardship of the environment.

“You know us well enough to know that there is no way we could ever leave our employees, leave our dealers, leave our city or leave our state. [have] someone comes along that we weren’t 100% sure they could do better than we could,” Foster told the crowd during his comments.

Foster will remain with the company, but will not run it. His role will be more focused on research and development and dealer relations, Foster said.

He added that he wants his Intimidator factory to be the most efficient factory in TTC’s organization and that its growth is what caught the attention of the “world-class company”.

According to Foster, Intimidator does “the same amount of business in eight days that we did in our first 14 months when we started. So the growth has been unreal.

The company, which started with 38 employees, now employs 550. As for the factory’s physical footprint, earthworks have been carried out on one side of its building for future expansion, but no plans official has not yet been established.

“We watched Intimidator as it grew from a startup nine years ago to the exceptional company it is today,” TTC’s Olson said. “The story is one of commitment, creativity, but also of determination and perseverance. We know that’s a big part of the story. … If anyone has lost faith in American history or the American dream, they need to talk to Robert and Becky, because it’s alive. And this is an incredible case. It’s a beautiful, beautiful story. »

TTC serves customers in 125 countries, employs 11,000 people and works with thousands of distributors and resellers around the world through its family of brands, Olson said.

He also said that one of the first phone calls he received when the purchase was announced was from the governor, who welcomed TTC to Arkansas and asked how the state could help the company. .

“We know The Toro Company will grow. You are a global company; you have amazing facilities across the United States. You have amazing brands and you are going to have opportunities for expansion through your leadership team and a growing economy in the United States,” Governor Asa Hutchinson said during his remarks at the event. “And so when you need to grow, we ask that you first look at this facility here in Batesville. We’ll make it happen. We’ll team up with you. We’ll get there because your success is our success. And we want to grow with you in Arkansas.