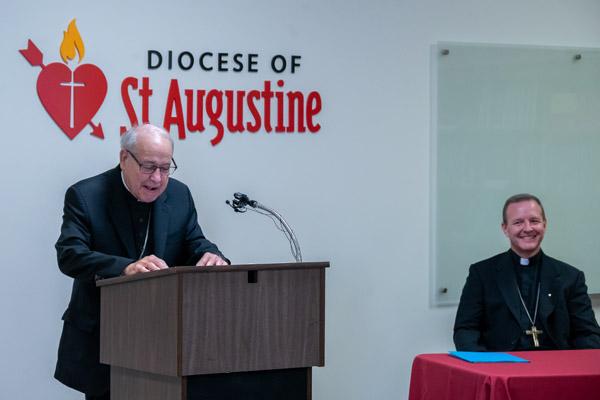 The new Bishop of Florida, diocesan director, pastor for 24 years in the Diocese of Little Rock

Bishop Felipe J. Estévez introduces his successor Bishop-elect Erik Pohlmeier during a press conference May 24 at the Catholic Center in Jacksonville, Florida. The Arkansas priest will be ordained a bishop on July 22.

Bishop Felipe J. Estévez introduces his successor Bishop-elect Erik Pohlmeier during a press conference May 24 at the Catholic Center in Jacksonville, Florida. The Arkansas priest will be ordained a bishop on July 22.

Father Erik Pohlmeier, a priest for 24 years in the Diocese of Little Rock, was chosen by Pope Francis May 24 to become the 11th bishop of the Diocese of St. Augustine, Florida.

He will be ordained and installed as a bishop at St. Joseph’s Church in Jacksonville on Friday, July 22.

“’Seek first the kingdom of God,’” Bishop-elect Pohlmeier said at a press conference the morning of May 24, his first public words about his appointment. “Now these are words I know by heart, but sometimes it takes me a little time to think about them and this was the case on May 15. As I finished three Masses in my parish and sat in my car, then I thought, “Maybe I’ll have lunch and go see a movie,” and then the phone rang.

He admitted his initial reaction to receiving the call from Apostolic Nuncio Bishop Christophe Pierre asking for a response to serve as a bishop was “a shock and nothing else really.” But soon, after saying yes and “breathing,” he pondered the idea of ​​the kingdom of God, which he revealed would be his episcopal motto. He later explained that this motto, “Seek first the kingdom of God”, would impact his approach to serving as a bishop in two main ways.

“I come as a shepherd. And the fields where we wander are everywhere in this diocese.” Bishop-elect Erik Pohlmeier

“One is to set our priorities,” he said. “We always have to keep the first things first. And the first thing is to seek the kingdom of God, to seek the will of God in everything we do. The second reason I chose this motto is that Jesus clearly explains in the Gospels that the kingdom of God extends to all aspects of life. It must be continually discovered in new ways and it is the work of our life of faith, this discovery. Jesus revealed the father who is the creator of all and pervades all of existence. And so the goal of Catholic life is not just to have more people in church, but to have more church people living their faith wherever they are, sharing the work that God has done in them. So, at the beginning of my time with you, I want to ask you to help me live my episcopal motto. I come as a shepherd. And the fields where we wander are everywhere in this diocese.

Born July 20, 1971, in Colorado Springs, Colorado, Bishop-elect Pohlmeier is one of five children of Deacon Tom and Sharon Pohlmeier of Paris. He was ordained a priest on July 25, 1998 at Subiaco Abbey. Throughout his 24 years he served in the parishes of Little Rock, Lake Village and Hot Springs. He was appointed pastor of Christ the King in Little Rock in 2020 when former pastor Msgr. Francis I. Malone was appointed bishop of the Diocese of Shreveport, Louisiana. Bishop-elect Pohlmeier is the fourth priest in the Diocese of Little Rock to be appointed bishop. The Diocese of St. Augustine is one of seven in the state, with a Catholic population of over 149,000 in 17 counties, with 37 schools and centers. In the Diocese of Little Rock, there are approximately 154,000 Catholics spread across 75 counties.

Retired Bishop Felipe J. Estévez, who served the Diocese of Florida for 11 years, introduced Bishop-elect Pohlmeier during the morning conference, reading a statement in part from Bishop Anthony B. Taylor, emphasizing his commitment to Catholic education, pro-life causes, faith formation and ability to speak Spanish. In a statement sent to residents of the Diocese of Little Rock, Bishop Taylor said, “Bishop-elect Pohlmeier is a born leader, a man of vision who takes initiative, a hard worker and a man deeply devoted to the Lord. He seeks to live his faith in everything he does, promoting everything the Church promotes, including the values ​​of family and life, human rights and the care of creation.

Bishop-elect Pohlmeier’s words had the tone of a homily, attributing the move to God, his upbringing and family, the people of Arkansas, and focusing on the work ahead.

The shock reverberated through the Diocese of Little Rock, with hundreds of well wishes and blessings pouring in in the first hours of the announcement on the Arkansas Catholic Facebook page on May 24. when he told them in person on May 18.

“It’s been a whirlwind since Father Erik told us it was coming. It was hard to keep it a secret for so many days,” said Sharon Pohlmeier, longtime secretary of St. Joseph’s Church in Paris, where they raised their children.

“It was really overwhelming,” Sharon continued. “Our family has just been the greatest blessing we could ever have. We ask God why he blessed us with the family he gave us because it is so overwhelming. We have been blessed in so many ways and that, of course, is the greatest blessing.All of our children have been very active in the Church and supported Erik in his priesthood.

The two have been able to see Bishop-elect Pohlmeier at least once a month for the past five to six years while he oversaw courses for diaconate candidates held at Subiaco Abbey.

“Now he is going to be so far away. It’s really hard to think that he’s so far away. But we know that’s what God calls him to do,” his mother said.

His brother, Jason Pohlmeier, principal of St. Joseph’s School in Fayetteville, will be ordained to the diaconate on June 25, part of the 46-man diaconate class led by Bishop-elect Pohlmeier as director of the training office. deacons. Jason and their father will serve as deacons during the episcopal ordination of Bishop-elect Pohlmeier.

“I think it’s a reminder to all of us that God can call us at any time in an unexpected way,” his brother said. “It sets an example for all of us to be ready to serve whenever we are called.”

More than a typical parish priest, Bishop-elect Pohlmeier has served in a variety of roles throughout his years in the priesthood, including current roles as Director of the Office of Faith Formation, Catholic Theological Consultant to Arkansas during 19 years old and director of continuing education for the clergy.

Jeff Hines, who will succeed Bishop-elect Pohlmeier as director of faith formation this summer, has known him for about 10 years, meeting him while graduating through the now-closed Little Rock Theology Institute. which bishop-elect Pohlmeier ruled for many years. years.

“The last time I went out to eat with him was at a restaurant in Little Rock, it was a very busy restaurant” and the two were in a dimly lit corner, not seated in a space that many would easily spot. “All the time we were there, there was a procession of people” who came to say hello to him, to recall baptisms and other sacraments or to introduce him to friends or relatives. “It lasted a whole hour. I was like, ‘Wow, what an impact this guy has had on this town.’ »

Sam Denefe, former director of evangelism for Bishop-elect Pohlmeier at Our Lady of the Holy Souls Church in Little Rock, said he will be able to juggle all the responsibilities of a bishop through the work he does. he has already accomplished.

“He will be an absolutely amazing bishop because he understands evangelism. … It’s about helping people on their intimate journey with Jesus,” said Denefe, whose family now attends St. Vincent de Paul in Rogers.

He also served as her spiritual director for three years, and she pointed to his “brilliant” spirit, able to synthesize Church documents and bring them “down into the hearts” of those he serves.

“I think I will miss his presence in our diocese because he has obviously done so much and has a servant’s heart,” Denefe said. “I remember saying, ‘You’re going to be a bishop.’ And him being like, ‘No.’ He was so kind and so humble, and everyone was like, ‘Yeah.’ »