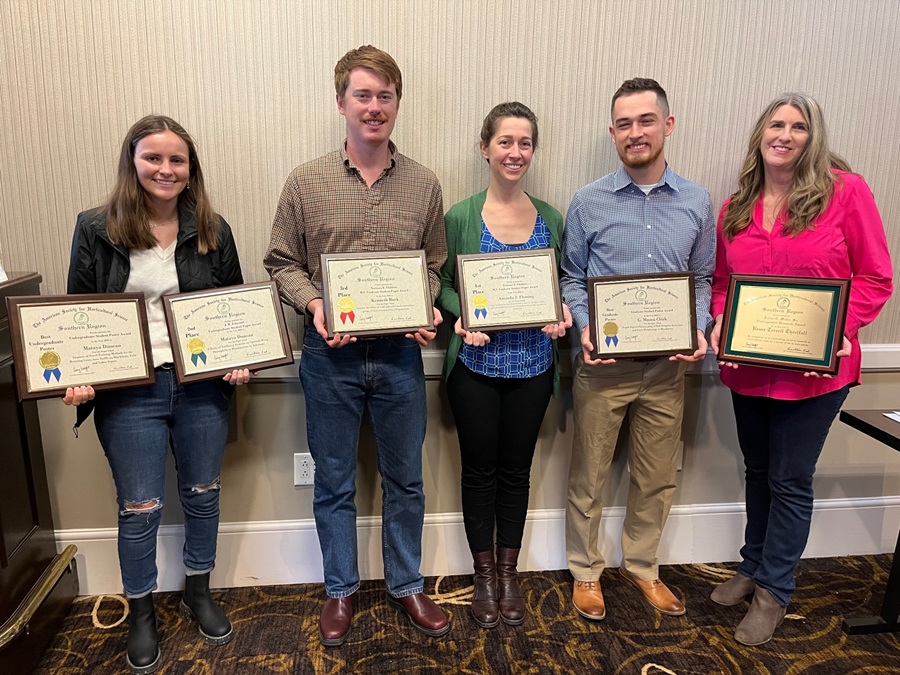 At the same meeting, food science researcher Renee Threlfall was honored for winning the Julian Miller Sr. Distinguished Researcher Award. The award recognizes an outstanding record in research on one or more horticultural crops and in one or more fields of horticultural research for a period of 10 years or more.

Threlfall is a faculty member of Dale Bumpers College of Agricultural, Food and Life Sciences. She is also a researcher and scientist at the Arkansas Agricultural Experiment Station, the research arm of the U of A System’s agriculture division. Food Science offers concentrations in Food Science, Food Technology, and Food and Culinary Science.

The conference was held February 10-13 in New Orleans. ASHS promotes and encourages national and international interest in scientific research and education in all branches of horticulture. The organization is made up of scientists, educators, students, landscape and turf managers, government, extension workers and industry professionals. Members focus on the practices and issues of horticulture, such as the selection, propagation, production and management, harvesting, handling and storage, processing, marketing and use of plants and horticultural products.

About Dale Bumpers College of Agricultural, Food and Life Sciences: Bumpers College provides life-changing opportunities to position and prepare graduates who will be leaders in businesses associated with food, family, environment, agriculture, sustainability and quality of life. human life; and who will be first-choice candidates for employers looking for leaders, innovators, decision makers and entrepreneurs. The college is named after Dale Bumpers, a former governor of Arkansas and longtime U.S. senator who propelled the state into national and international agriculture. For more information on Bumpers College, visit our websiteand follow us on Twitter at @BumpersCollege and Instagram at BumperCollege.

About the University of Arkansas: As Arkansas’ flagship institution, the U of A offers an internationally competitive education in more than 200 academic programs. Founded in 1871, the U of A contributes more than $2.2 billion for Arkansas’ economy through the teaching of new knowledge and skills, entrepreneurship and employment development, discovery through research and creative activity while providing training in professional disciplines. The Carnegie Foundation ranks the U of A among the top 3% of American colleges and universities with the highest level of research activity. US News and World Report ranks the U of A among the top public universities in the nation. Find out how the U of A is working to build a better world in Arkansas Research News.