The University of Arkansas, Fayetteville saw record enrollment, with 30,936 students on campus this fall — an 8.3% increase from last year and the first time the university has crossed the 30,000 mark – according to preliminary figures released on Wednesday.

New degree-seeking freshmen also set a record high, with 7,099 joining campus this year, according to the university. This is a jump of 17% compared to last year.

“It feels a lot busier during the switch times” between classes, and “it’s really hard to get a parking space,” senior Austin Bowerman said. He also missed a class he wanted this semester, which was “a little frustrating”, but that was more due to his late attempt to get into that class than the number of students enrolled at the university.

“I am very proud of the record number of Arkansans in the freshman class,” and the overall enrollment growth “underscores that the U of A is a destination institution attracting students from both Arkansas and from across the country,” acting Chancellor Charles Robinson said in a statement from the university. “The freshman class will have the highest incoming GPA in our history — these students are poised to succeed — that’s good news for our campus and for our state.”

The average GPA for new degree-seeking freshmen is 3.77, also a record high, according to the university. Ten years ago, this average was 3.6.

Freshman Caroline Field was able to get all her desired courses and on-campus housing because she enrolled in college earlier than many of her peers, she said. “My whole family moved here, I always knew I wanted to go too, and I never even applied anywhere else.”

“We are growing and thriving,” said Mark Rushing, Associate Vice Chancellor, University Relations. “Our primary mission is to provide education and opportunity to Arkansans, but we have also become a destination school, very popular with students from surrounding states,” as approximately two-fifths of students at the university are non-native. the Arkansans.

“I wanted a new region, a new state, and a new culture,” and the University of Arkansas was “actually cheaper than” the University of Colorado, he said. “I am very happy to [my decision]and I love the school and the atmosphere here.”

The average total tuition and fees for an Arkansas undergraduate resident taking a full course load is $9,656, but $27,410 for nonresidents, according to the university.

“Considering everything you get, you get what you pay for,” said Bowerman, an English minor elementary education major who hopes to teach middle school English/language arts. “There are a lot of great teachers and classes, and there are so many opportunities in the area, not just on campus, but all over Fayetteville” and in northwest Arkansas.

“The neighborhood is really great — I love the campus — and it’s a beautiful place,” added Bowerman, who resides in Springdale and travels to campus. “The experiences I’ve had here, I wouldn’t change a thing, and you make friends super fast here, because everyone’s polite.”

Rhonda Gulliver enrolled in college this year after her husband’s military career took the couple from California to northwest Arkansas, and she was thrilled not only that her credits from a California college have been postponed, but have a great university “so close by,” she says. had no problem taking the classes I wanted because I gave myself plenty of time.”

“It’s beautiful here – the campus is beautiful – and the buildings are beautiful,” said Gulliver, who is majoring in communications with a focus on film. “I love the library, it has so many places to study, everyone is helpful, and I think it’s going to be a great experience.”

Yost had no problem taking the classes he wanted this semester, both because his field of study – data science – is relatively new to the university, so there aren’t many of students who are looking for these courses, and because he is a member of the Honors College, so he can choose his courses early, he said. However, “I know it wasn’t quite the same story for some of my friends.”

His search for housing “hasn’t been terrible” and he lives near the university in a townhouse on Martin Luther King Jr. Boulevard, he said. “There are so many accommodations here.”

Enrollment at the university has been increasing for several years despite the fact that many colleges and universities across the country have seen their enrollment decline, especially during the pandemic. Nearly 1.3 million students have disappeared from US colleges during the pandemic, and undergraduate student attendance has dropped nearly 10%.

“We’ve seen a drop during the pandemic, with some students postponing their college careers for a bit, but now they’re back,” Rushing said. “Our tuition is comparable to other institutions in the state, and an affordable, high-quality education — with plenty of opportunity — is a pretty good mix.”

“Northwest Arkansas is booming, and there are Fortune 500 companies — Walmart, Tyson [Foods]JB Hunt – right here ready to hire students when they graduate,” he said. “We help them find their way, and [students] see the return on investment.”

Enrollment at the Sam M. Walton College of Business is increasing substantially each year, especially in JB Hunt Transport’s supply chain management department, said John Thomas, director of media relations and grassroots communications. Business degrees are especially attractive to students who want to stay in Northwest Arkansas, a business “hub” in the state.

“There are many reasons to celebrate the growth of the university over the past two years, [and the university] has worked to get ahead of the much-anticipated enrollment cliff that is already beginning to have an effect on college enrollment across the country,” Suzanne McCray, vice provost of enrollment and dean of admissions, said in a statement from the agency. university.” Expanding our enrollment now helps provide a buffer for our campus and for our community, and we have been able to grow while increasing opportunities for Arkansans, access for diverse communities, and academic preparation for incoming students. »

While much of the increase in enrollment is attributable to Arkansans, out-of-state enrollment continues to grow and these students are making campus “a more diverse place,” Rushing said. “A lot of them are second- or third-generation Arkansasers: Their parents or grandparents graduated from the University of Arkansas, or they’re from Arkansas but moved to other places. other states, but they’re still growing up rooting for the Razorbacks.”

“Also, we do pretty well in athletics, [which] creates a pride,” Rushing said. “A lot of students want to be in this high-profile SEC atmosphere.”

The surge in enrollment presents some logistical challenges, such as student housing, he said. “A lot of students wanted to live on campus this year – not just freshmen, but sophomores, juniors and seniors – but we prioritized newcomers because we want as many freshmen live on campus as possible.”

In most cases, new freshmen must live on campus.

Field, who plans to study business and marketing with an emphasis on sports marketing, is happy to live on campus during her freshman year at college.

The university has “6,200 on-campus beds” and has reserved an additional 900 beds in apartments that are technically off-campus, but a few blocks from the university, Thomas said. These 900 beds remain considered university accommodation for students, who could choose between on- or off-campus accommodation.

Many preferred the latter option, he said. “They still pay the on-campus housing rate, but they get amenities like a swimming pool” that aren’t available in traditional on-campus dorms.

Rushing isn’t sure how much enrollment growth will be a goal for the university, he said. “It will depend on the new Chancellor and others, but – just me speaking – I think that’s about where we would like to be.”

Students change classes Wednesday at the University of Arkansas in Fayetteville. Upper classes say these times are busier and parking is a challenge. (NWA Democrat-Gazette/JT Wampler) 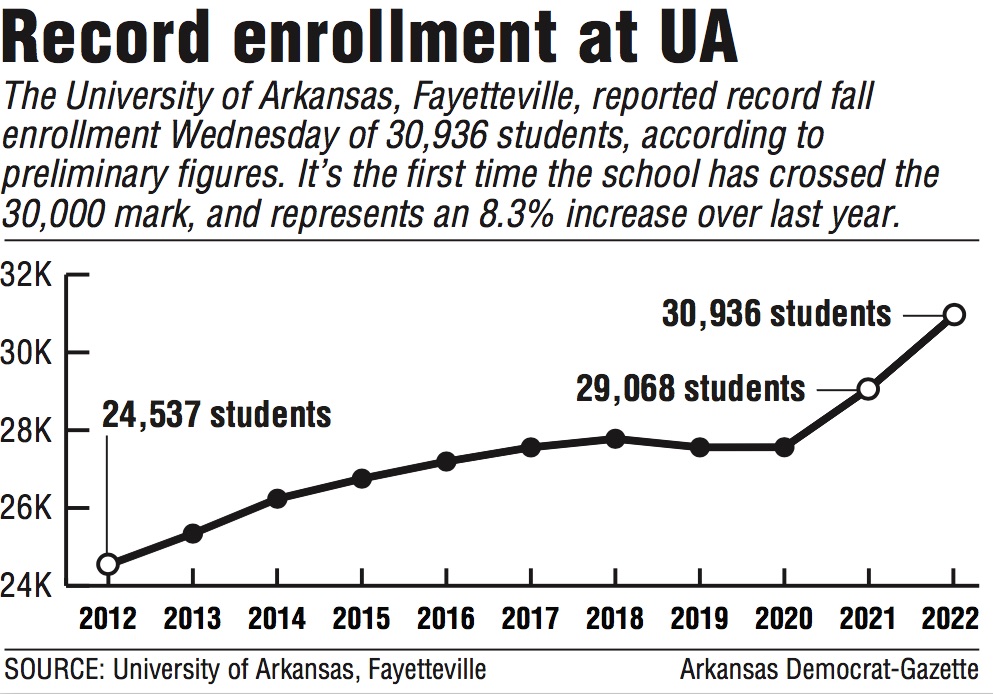 Thousands of people are expected to descend on the Ozarks for the Format music festival. The festival is scheduled to begin September 23, 2022, on nearly 300 acres of land at Sugar Creek Airstrip in Benton County. FORMAT welcomes a wide range of world-renowned international and local musicians and artists, alongside emerging talent and a […]

Daniel A. Reed, one of four finalists for the University of Arkansas, Fayetteville chancellorship, spoke about his roots at a forum on campus Friday. “As a kid from Arkansas, I can’t tell you how excited I am to be home,” Reed said, adding that if he were chosen as the new chancellor, “it would be […]

FAYETTEVILLE, Ark. –Big 12 commissioner Brett Yormack announced a few days ago that the conference will be looking west with its expansion efforts. Notice he didn’t mention looking east. This is because every valuable team immediately east of the Big 12 is in the SEC and was unwilling to drop out of the Big 12 […]