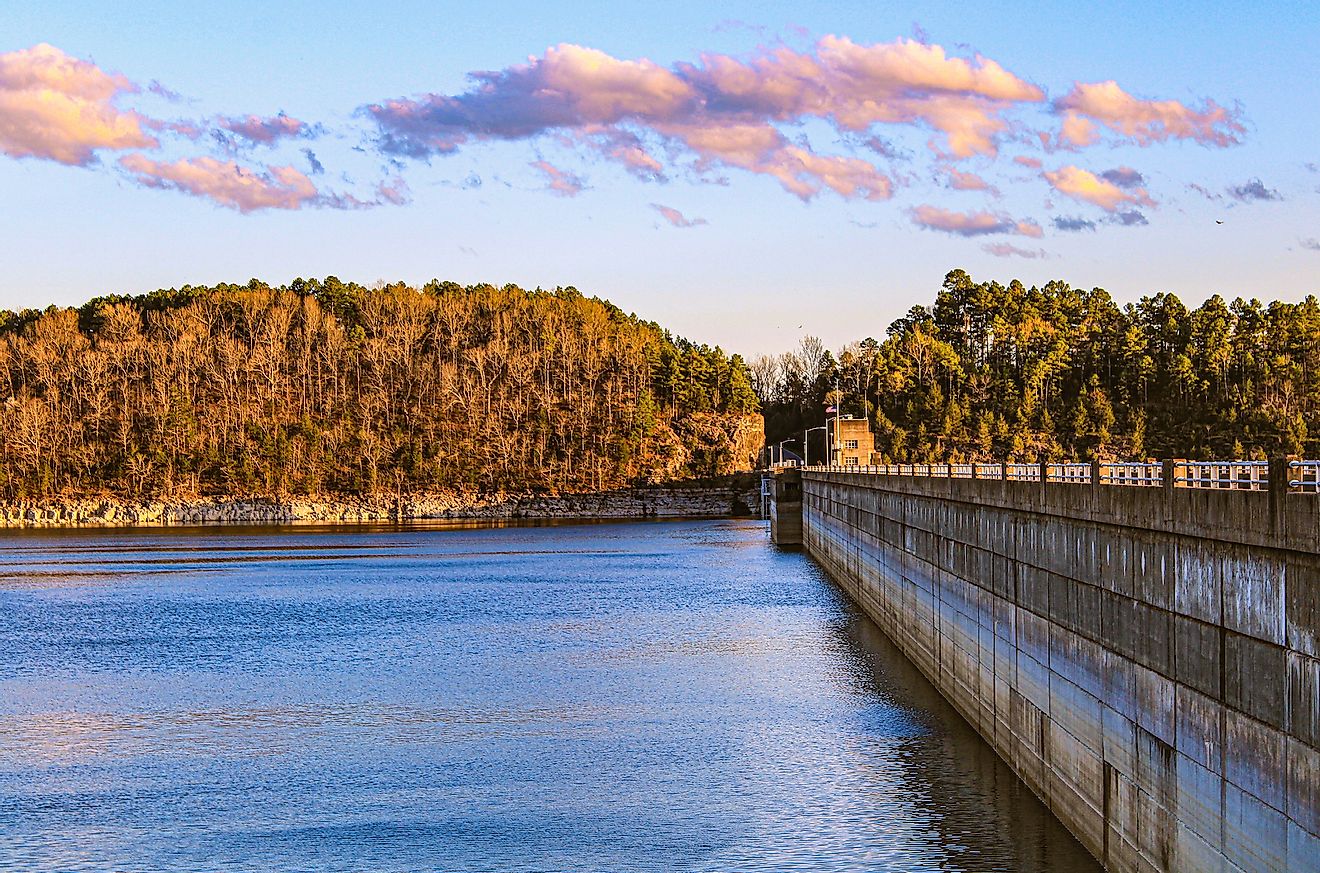 Norfork Dam is a large gravity dam that spans the North Fork River in Baxter County, north-central Arkansas, United States. Construction of the dam began in the spring of 1941, making it one of the oldest multi-purpose concrete structures built by the U.S. Army Corps of Engineers. The Norfork Dam led to the creation of Lake Norfork, and the dam and lake were named after the nearby town of Norfork.

The Norfork Dam is one of four multi-purpose dams built in the upper White River basin primarily to control flooding, generate hydroelectric power and provide excellent recreational opportunities. The dam is located approximately 4.8 miles upstream from the town of Norfork at the meeting point of the White and North Fork rivers. The top of Norfork Dam supports a two-lane road that is part of Arkansas Route 177. This 2,624 foot long concrete dam is located approximately 222 feet above the creek bed and is 200 feet thick at its base. Eleven conduits cross the bottom of the spillway section of the dam and slide gates control the flow of water through these conduits. Four steel-lined penstocks, each 18 feet in diameter, supply lake water to the powerhouse’s turbines. Added to this is an overflow weir through which 12 radial-type crest gates control the water flow. It is also estimated that the Norfork Dam contains around 1,500,000 cubic meters of concrete and around 2,000 tonnes of reinforcing steel. The Norfork Dam has led to the creation of the 43 mile long Lake Norfork, which has over 890 km of shoreline and covers an area of ​​8,900 ha. Much of the lake is in Baxter County, while its northernmost part is in Ozark County of the US state of Missouri. About 37% of the lake’s storage capacity is used for flood control, while the remaining part is used for power generation and natural flow regulation. Lake Norfork contains 19 recreation parks that provide visitors with many recreational opportunities like boating, water skiing, hiking, camping, and picnicking. Several species of fish are found in Lake Norfork including catfish, walleye, crappie, bass, sea bream, redeared sunfish etc. making it a popular fishing destination in the center-south. The Norfork National Hatchery, built on 43.9 acres below the Norfork Dam, produces over 500,000 pounds of trout each year.

Before construction of the Norfork Dam began in the late 1930s, the local economy in Baxter County was deteriorating, and annual per capita income fluctuated between US$100 and US$200. Additionally, more than 600 small farms were abandoned in 1940 alone. Several far-sighted people in northern Arkansas had visualized the wasted opportunities of leaving the waters of the North Fork River unchecked and allowing it to wreak havoc. on the cultures of the valley of the White River. Clyde T. Ellis – Congressman from Arkansas’ Third District, promised the construction of a dam that would provide cheap hydroelectricity and lead to the growth of industries and lift the region out of the depths of the Depression. The Flood Control Act, which U.S. President Franklin D. Roosevelt signed on June 28, 1938, authorized the construction of six dams and reservoirs for the White River and its tributaries. However, hydroelectric power generation was initially not included in the Norfork Dam project. Therefore, additional funding and authorization for hydroelectricity was obtained from the Flood Control Act of 1941 due to the tireless efforts of Congressman Clyde T. Ellis. Construction of Norfork Dam began in the spring of 1941, and the construction contract was awarded to the Utah Construction Company and the Morrison-Knudsen Company, Inc., by the Little Rock District of the U.S. Corps of Engineers. The Norfork Dam became one of the six largest concrete dams in the country after its construction was completed in 1944. The construction of the Norfork Dam and reservoir displaced more than 400 people from one of the most populous and prosperous regions of Baxter County. Nevertheless, the Norfork Dam had begun to attract several tourists early on, which greatly contributed to the economic prosperity of the region.